From Wikipedia, the free encyclopedia
For other uses, see Pantanal (disambiguation).

The Pantanal (Portuguese pronunciation: [pɐ̃taˈnaw]) is a natural region encompassing the world's largest tropical wetland area. It is located mostly within the Brazilian state of Mato Grosso do Sul, but it extends into Mato Grossoand portions of Bolivia and Paraguay. It sprawls over an area estimated at between 140,000 and 195,000 square kilometres (54,000 and 75,000 sq mi). Various subregional ecosystems exist, each with distinct hydrological, geological and ecological characteristics; up to 12 of them have been defined (RADAMBRASIL 1982).[1][2][3][4][5]

Roughly 80% of the Pantanal floodplains are submerged during the rainy seasons, nurturing an astonishing biologically diverse collection of aquatic plants and helping to support a dense array of animal species.

The name "Pantanal" comes from the Portuguese word pântano, meaning wetland, bog, swamp, quagmire or marsh. By comparison, the Brazilian highlands are locally referred to as the planalto, plateau or, literally, high plain. 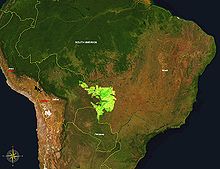 The extent of the Pantanal in Brazil, Bolivia, and Paraguay

The Pantanal is a huge, gently-sloped basin that receives runoff from the upland areas (the Planalto highlands) and slowly releases the water through the Paraguay River and tributaries. The formation is a result of the large, concave pre-Andean depression of the earth's crust, related to the Andean orogeny of the Tertiary. It constitutes an enormous internal river delta, in which several rivers flowing from the surrounding plateau merge, depositing their sediments and erosion residues, which have been filling, throughout the years, the large depression area of the Pantanal. This area is also one of the distinct physiographic provinces of the larger Parana-Paraguay Plain area.[citation needed]

The Pantanal is bounded by the Chiquitano dry forests to the west and northwest, by the Arid Chaco dry forests to the southwest, and the Humid Chaco to the south. The Cerrado savannas lie to the north, east and southeast. The Pantanal has an average yearly rainfall of 1,000–1,400 mm (39–55 in), but is fed by the upper Paraguay River. Its average temperature is 25 °C (77 °F), but temperatures can fluctuate from 0 to 40 °C (32 to 104 °F).

Pantanal in flood condition, with a private fazenda in the background

Floodplain ecosystems such as the Pantanal are defined by their seasonal inundation and desiccation.[1] They shift between phases of standing water and phases of dry soil, when the water table can be well below the root region.[1] Soils range from high levels of sand in higher areas to higher amounts of clay and silt in riverine areas.

Elevation of the Pantanal ranges from 80 to 150 m (260 to 490 ft) above sea level.[1] Annual rainfall over the flood basin is between 1,000 and 1,500 mm (39 and 59 in), with most rainfall occurring between November and March.[1] In the Paraguay River portion of the Pantanal, water levels rise between two meters to five meters seasonally; water fluctuations in other parts of the Pantanal are less than this.[1] Flood waters tend to flow slowly (2 to 10 cm (0.79 to 3.94 in) per second[1]) due to the low gradients and high resistance offered by the dense vegetation.

When rising river waters first contact previously dry soil, the waters become oxygen-depleted, rendering the water environs anoxic.[1] Many natural fish kills can occur if there are no oxygenated water refuges available (the reason for this remains speculative: it may be due to the growth of toxin-producing bacteria in the deoxygenated water rather than as a direct result of lack of oxygen (McClain 2002)).

Main article: List of plants of Pantanal vegetation of Brazil

The vegetation of the Pantanal, often referred to as the "Pantanal complex", is a mixture of plant communities typical of a variety of surrounding biome regions: these include moist tropical Amazonian rainforest plants, semiarid woodland plants typical of northeast Brazil, Brazilian cerrado savanna plants and plants of the Chaco savannas of Bolivia and Paraguay.[1] Forests usually occur at higher altitudes of the region, while grasslands cover the seasonally inundated areas. The key limiting factors for growth are inundation and, even more importantly, water-stress during the dry season.[1] The Pantanal ecosystem is home to 3500 known plant species.[citation needed]

The Pantanal ecosystem is also thought to be home to 1000 bird species, 400 fish species, 300 mammalian species, 480 reptile species and over 9000 different subspecies of invertebrates.

The apple snail is a keystone species in Pantanal's ecosystem. When the wetlands are flooded once a year, the grass and other plants will eventually die and start to decay. During this process, decomposing microbes deplete the shallow water of all oxygen, suffocating larger decomposers. Unlike other decomposing animals, the apple snail have both gills and lungs, making it possible for them to thrive in anoxic waters where they recycle the nutrients. To get oxygen they extend a long snorkel to the water surface, and pumps air into their lungs. This ability allows them to consume all the dead plant matter and turning it into nutritious fertilizer available for the plants in the area. The snails themselves are also food for a variety of animals.[6][7][8]

Among the rarest animals to inhabit the wetland of the Pantanal are the marsh deer (Blastocerus dichotomus) and the giant river otter (Pteroneura brasiliensis). Parts of the Pantanal are also home to the following endangered or threatened species: the hyacinth macaw (Anodorhyncus hyacinthinus) (a bird endangered due to smuggling), the crowned solitary eagle, the maned wolf (Chrysocyon brachyurus), the bush dog (Speothos venaticus), the South American tapir (Tapirus terrestris) and the giant anteater (Myrmecophaga tridactyla). Common species in the Pantanal include the capybara (Hydrochoerus hydrochaeris) and the yacare caiman (Caiman yacare). According to 1996 data, there were 10 million caimans in the Pantanal making it the highest concentration of crocodilians in the World.[9] The Pantanal is home to one of the largest and healthiest jaguar (Panthera onca) populations on Earth.

Most fish are detritivores, primarily ingesting fine particles from sediments and plant surfaces.[1] This is characteristic of fish living in South American flood-plains in general. Fish migration between river channels and flood-plain regions occurs seasonally.[1] These fish have many adaptations that allow them to survive in the oxygen-depleted flood-plain waters.[1]

In addition to the caiman, the following reptiles inhabit the Pantanal: the yellow anaconda (Eunectes notaeus), the gold tegu (Tupinambis teguixin), the red-footed tortoise (Geochelone carbonaria) and the green iguana (Iguana iguana).

The Pantanal region includes essential sanctuaries for migratory birds, critical nursery grounds for aquatic life, and refuges for such creatures as the yacare caiman, deer, and Pantanal jaguar.[10]

The main human activities which threaten the Pantanal ecosystems are:

A portion of the Pantanal in Brazil has been protected as the Pantanal Matogrossense National Park. This 1,350 square kilometres (520 sq mi) park, established in September 1981, is located in the municipality of Poconé in the State of Mato Grosso, between the mouths of the Baía de São Marcos and the Gurupi Rivers.

This park has been designated a Ramsar Site of International Importance under the Ramsar Convention since May 24, 1993.

The SESC Pantanal Private Natural Heritage Reserve (Reserva Particular do Patrimonio Natural SESC Pantanal) is a privately owned reserve in Brazil, established in 1998 and 878.7 km2 (339.3 sq mi) in size. It is located in the north-eastern portion, known as "Poconé" Pantanal, not far from the Pantanal National Park. It is a mix of permanent rivers, seasonal streams, permanent and seasonal floodplain freshwater lakes, shrub-dominated wetlands and seasonally flooded forests, all dedicated to nature preservation, and was designated a Ramsar Site of International Importance under the Ramsar Convention.

Otuquis National Park and Integrated Management Natural Area is a national park of Bolivia in the Pantanal.