The park is in the Caatinga biome, and covers 152,142 hectares (375,950 acres). It was created by decree 91.655 of 17 September 1985, and is administered by the Chico Mendes Institute for Biodiversity Conservation.[2]The park covers parts of the municipalities of Palmeiras, Mucugê, Lençóis, Ibicoara and Andaraí in the state of Bahia.[3]

The park lies in the rugged Sincorá Range in the east of the plateau, an area of folded and heavily eroded structures. The range is elongated in a north-south direction, and has an average width of 25 kilometres (16 mi).[3]The highest point of the state is in the park, the 2,036 metres (6,680 ft) Pico do Barbado. Both gold and diamonds have been found in the range.[4] The range forces moist air moving west from sea upward which causes higher levels of rainfall, particularly in the east.[3] There are many systems of caves formed by the rivers of the region.[1] 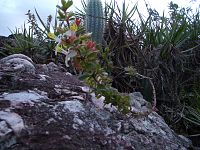 Typical flora of the Chapada Diamantina